Call the restaurant to book on 0131 441 7427.
MENU
Our restaurant has been welcoming locals from Colinton and beyond since 1997.
SEE MENU
We’re always creating new plates for our customers to enjoy. Ask us about our specials available.
SEE MENU

Back in 1973, when Slade were in the pop charts, The Wombles started on TV and Live and Let Die was at the cinema, Dante and Nancy Margiotta set up their first sweet shop in Colinton. ‘The Snuff Box’ as it was known, occupied half of the space of the current restaurant today. It then grew and moved into the ironmonger’s store next door. The upfront costs were prohibitive, but an agreement was made to pay £17 per week until the debt was collected. Fast forward 24 years and a huge change was about to happen. In 1997, ‘The Snuff Box’ was transformed into the business we know and love today and Dante’s was born! Today, Dante and Nancy still pay a major role in the restaurant. Dante is still cooking behind the scenes and Nancy’s world-famous sticky toffee pudding is still a firm favourite!
About 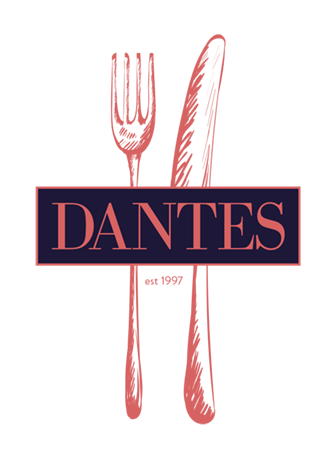